Blog - Latest News
You are here: Home1 / copywriting2 / How Paco Got Us Out of a Tight Spot 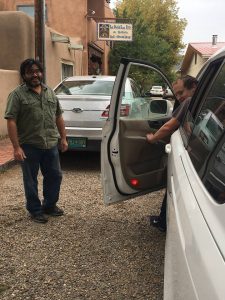 While we slept, someone parked their dented rust bucket so close to our van that we couldn’t get out.

Our friends were already on their way to the Taos Ski Valley, but we were in so tight, we had only inches to move and the curb was so steep that it blocked the way.

Just when we had resigned ourselves to a walking tour, Paco, the owner of La Doña Luz Inn, arrived to show us what he’s truly made of.

What grit! What patience! What determination!

As a small crowd gathered to see if he would add another dent to the tin can that had us trapped, he squeaked his way out centimeter by centimeter.

For a while we couldn’t even tell if he was making any progress. But he had faith in his own mutant ability. Other people stopped by to offer their two cents, and he just said he kept his mind on his task and kept moving.

Finally he got the van lined up so we could back out. We were free.

As we thanked Paco for his fancy unparking he said, “I remember you from the last time you came here and visited your friends. What was it, ten years ago?”

How could we forget? We had such a great time. And this year, talking to some of the other guests, we could see that they came over and over again too. The only regret that we had was that we let eight whole years go by before doing it again. What a shame!

I don’t know if they have a newsletter, but I could see how his business could benefit from having a newsletter.

First of all, it is a historical bed and breakfast, with a rich history and lots of stories. The guests come back, sometimes every year. But the thing is, the guests could certainly come back more often.

In our case, we come to Taos often, but we usually either go home for the night or stay at the Sagebrush Inn, simply because it is cheaper. (It’s lame, but true.)

Using a newsletter they don’t have to compete on price. They can just send out the emails with stories about what’s going on with the hotel, talk about the artwork, tell more stories about the people who work there and what is going on in the city.

Then include a link to reserve a room.

That’s it. When people get the newsletter, they can decide to come more often, or they can share the newsletter or forward it to a friend. They would get more repeat business and more referrals without spending a lot on advertising.
All right. While I go call Paco and tell him about the newsletter plan, I want you to answer this question.

What qualities (other than price) does your business have that makes you better than your competitors? Those are the things that you talk about in your newsletter.

The idea is that you keep the relationship going, and make more sales without having to constantly offer discounts.

Talk to you soon,
MandyP.S.  I’d love to help you get started with a newsletter. I believe it’s one of the best ways to grow a business.

If you’re just getting started with a newsletter, or want to inject some life into your existing publication, I can help. I offer a one-hour consultation where we can plan out the content for your upcoming issues so that you will make more sales.

Start making sales right from your landing page What’s the biggest barrier to you making more sales?
Scroll to top